It's been about 3 months since we decided to try to cast some metals in our FutLab workshop. It started relatively inconspicuously and quite easily. We bought a special clay, a jewelry kiln and made the first experimental simple castings into the clay with the help of 3D printing. Total success at the beginning. But then we decided to try casting real metal statues, especially bronze, brass and copper. We suspected that it would not be completely funny and also that it was not 🙂 But in the end we did quite well.

As a technology, we first chose 3D printing of the model (negative form) and subsequent decal of the model in clay. For melting, we used a simple electric melting furnace for jewelers. Nothing extra, but it was enough for our first attempts. This technology is suitable for simple, slightly articulated models, smaller sizes. Such as castings of axes, knives, hammers, etc.

However, once we wanted to cast more complex models, we needed to use a different method. As the easiest, most well-known and oldest method, we used the so-called lost wax or PLA method.

Using a 3D printer, a model is made, then a silicone mold is made, a 3D model is removed, then a wax negative mold is cast and then another plaster mold is made around the wax. The wax is then melted in a furnace and hot molten metal is then poured into the resulting cavity. The lost PLA method eliminates the need to produce a silicone mold and a subsequent wax negative mold.

Pattern for a 3D model from the game Skyrim

Apart from the fact that casting is a rather dangerous hobby in itself and we generally do not recommend trying to cast something at home, we also very soon found out that it is not an easy job at all.

Very soon we also found out that we need a proper furnace for burning molds. After a short market research, several phone calls and a month of waiting for delivery, we finally had a proper professional kiln.

If you mix the mold yourself and you do not have very precise instructions for production and subsequent firing, you will have an unpleasant surprise. The gypsum cracks, collapses, does not hold its shape or dries extremely slowly. We tested all possible materials and removed the first 3 burns from the furnace only in half molds.

It was necessary to find out the exact firing temperature curve for the given material and the purpose of our use. In the fourth form, we finally succeeded. It should be noted that such a furnace consumes a lot of electricity and it is not completely cheap fun 🙂

Another problem followed. We already had the molds ready and fired correctly, but our second electric furnace broke and we had nothing to melt the bronze. So we were forced to make our own coke or propane furnace. We succeeded, but in the end we melted the metal in a chamber kiln (same principle, better results).

After 3 months of failures, we were a little frustrated and wanted to cast at least some metal. Fortunately, just before the breakdown of the el. the furnace still managed to cast brass.

We also had one durable silicone mold, so at least we poured tin into it. It was not made hollow, so the 15 cm large statuette ate 3 kg of tin 🙂

Due to the fact that the mold was primarily intended for wax or gypsum, it did not have the necessary air channels for unwanted bubbles and air removal. It can be seen on the casting itself as a porous surface.

Paradoxically, on the same day, we finally managed to cast bronze. It was nerves and we expected all the negative scenarios, but in the end the result was relatively solid. It should be noted that the statuette is never completely removed from the plaster and about 50% of the activity is the subsequent cleaning of the casting using a grinder, cutter, chisel and steel wool (so-called chiselling). 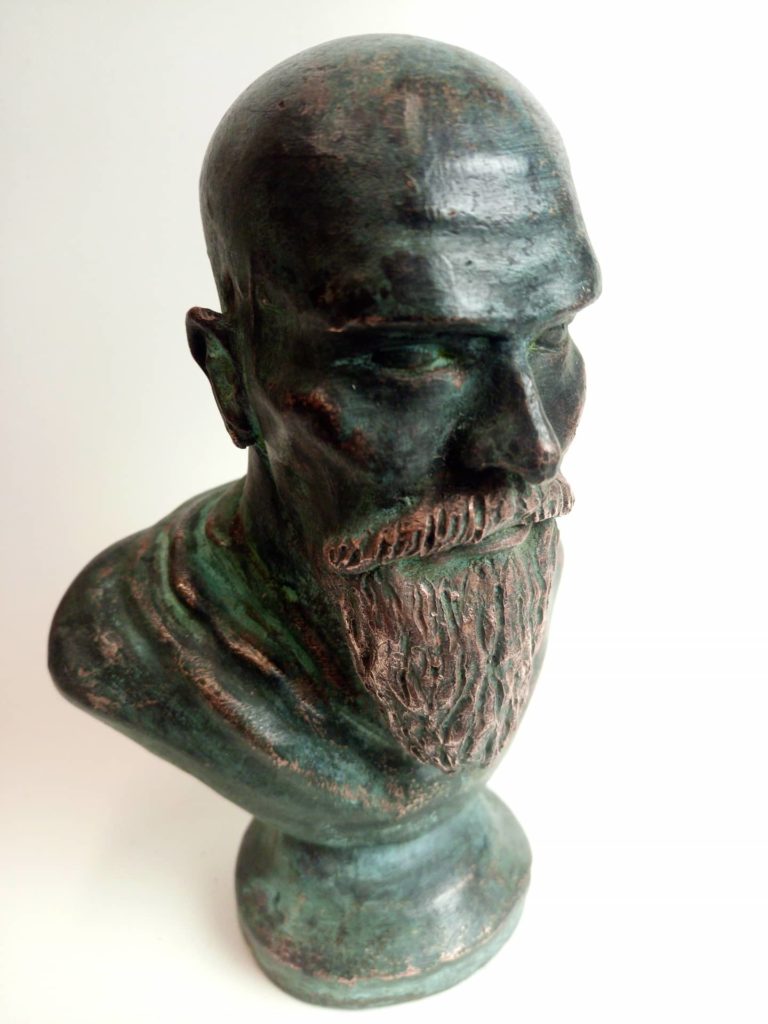 Bronze statue of an antique patina

What we are planning now

Thanks to experimenting with metal casting, we have learned a lot of new knowledge and we are now able to make some custom castings if anyone is interested. Of course, it is necessary to take into account that the production of such a sculpture is not easy and cheap. However, thanks to 3D printing, we are now able to offer a more efficient and slightly cheaper casting.

At the moment we have this episode behind us and we are already able to cast bronze busts up to 40 cm in size, or possibly larger from several pieces 🙂

We are now using our own furnaces and professional material for industrial casting, we are also using the lost wax method more.

If you are interested, we offer bronze casting to order .

You can also read our article on how to cast a bronze bust step by step .